You are here: Home / Traveling to the Ancient City of Carthage

Traveling to the Ancient City of Carthage 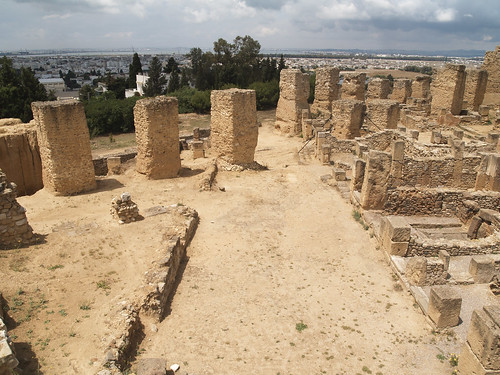 Tunisia may be the smallest country in North Africa, but it is also one of the most diverse in natural landscapes. Here is a place where the Sahara desert meets the mountains, and oasis gives way to coastline. There is a rich an ancient history to Tunisia, and many tourists are drawn to its exotic resorts, sunny beaches, and legendary cities. If you’re interested in exploring more of Tunisia than just the tourist-filled coast, one option that experts say is a must for any traveler is a visit to the ancient city of Carthage.

Carthage is nearly 3,000 years old, originating as a Phoenician colony before the city itself was created in 814 BC. Legend has it that Queen Dido of Tyre fled from her kingdom when her husband was murdered by her brother to found the great city of Carthage. In the time of the Carthaginian Empire, it became a major trade city of the Mediterranean. But the Romans destroyed the ancient, thriving city and rebuilt it under their occupation. It became the second-largest city in the Roman Empire before it was taken over, in turn, by the Arabs in the 7th century – and it remains a part of Islamic Tunisia to this day.

Train travel is a convenient method of navigating Tunisia. The Tunis-Goulette-Marsa, or TGM rail, leaves from the capital city of Tunis and can take you to one of four Carthage stations. The most popular is Carthage-Hannibal, from which you can walk to most of the best ruins and spots of interest in the ancient city. Mich of the city is within walking distance of everything else, but keep in mind that, depending on the season, it could be very hot. There are taxis available if you are lost or prefer to catch a ride.

The remains of Carthage are mostly Roman structures, but they include an amphitheater, villas, temples, and the Antonine Baths, which were the largest Roman baths ever built. But there are also places where you can see pre-Roman Carthaginian ruins, which can give you a glimpse into one of the oldest civilizations in the world. The Magon Quarter has the remains of a house as well as part of a defensive wall. On Byrsa Hill, where the Carthage National Museum stands, there are a number of original Carthage ruins. And in the burial field known as the Sanctuary of Tophet, you can find the graves of ancient Carthaginians, including many children – some historians actually believe that child sacrifice was once practiced here.

Tunis is a central city, with easy access to many of the most beautiful spots in Tunisia, including Carthage. The city itself features amazing architecture, Turkish baths, and fine Mediterranean dining. The best time to visit could be in late spring or early autumn, when the rainy season is transitioning to summer – it will be hot but not as humid as in the summer months. If you are traveling on a budget, it’s a great place to find gorgeous local hotels without the exorbitant prices of the larger resorts.

The atmosphere of Tunisia is appealing to many tourists, but getting a chance to see the ruins of thousands-year old city is a rare and exciting opportunity. How can you help but imagine what life was like so long ago? Beyond the beaches and date palm oasis life in the surrounding areas, seeing Carthage can be rewarding in a whole different way.

Mildred Robertson writes for travels blogs and recommends taking some holidays to Tunisia for a great historical and cultural excursion.