You are here: Home / The 7 Deadly Sins That Can Affect Your Savings Accounts

There are many financial tips that can be gained from being aware of the seven deadly sins. These parts of human life all reflect areas where careless spending can be made. To this end, here are the seven sins, and how having a well structured savings plan will  help you avoid these pitfalls. 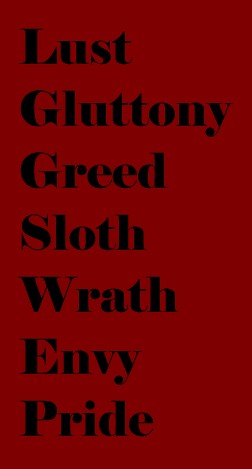 Perhaps the easiest to understand, lust is the simple act of wanting something. Wanting something usually leads to purchasing it, which is spending. Spending on things you don’t need, but simply want, is a sure way to waste money that could be better saved elsewhere.

Being lazy also has its disadvantages. Even if you’re not overtly expensive, you can still run into problems if you don’t simply take the time and effort to sort out your finances.

Even a simple missed payment can put you behind on a payment schedule, often with unforgiving interest. Likewise, don’t stick with your current bank out of laziness. Take the time to compare savings accounts and find a better deal.

The act of giving in, gluttony is an important area to avoid financially. The likes of credit cards should be used for emergencies, rather than a second form of income. The same goes for store cards, as they only encourage spending on unnecessary items.

Furthermore, bear in mind that every time you apply, your credit rating goes down. Potential creditors in the future will see this, and your willingness to get into debt will no doubt be a discouragement.

People can do many things when they’re angry, including careless spending. Emotions and money do not go together well. Making financial decisions in a heated mood can have serious consequences.

Likewise, cheering yourself up with an expensive new item may seem harmless, but the costs rack up. If you keep justifying these excuses, you’ll end up in a lot of debt – which will no doubt make you angry again.

It may be a figure of speech, but be careful not to keep up with the Joneses. Trying to improve one’s appearance, or the illusion of status, is a sure way to lose money. Instead, you should learn to be happy with, and appreciate, what you have. Do the smart thing and learn not to play the competitive game; the grass isn’t always greener on the other side.

It’s true what they say: pride cometh before the fall. This is no different in finances. A lot of people will have difficulty with their savings, and are simply too proud to ask for help. Whether this is from friends and family, or simply asking a creditor for an extension plan, there is no shame in admitting difficulties.

Not saying anything, on the other hand, only invites more serious consequences. Letting debts get out of hand because you were too prideful to say anything will only make things worse.

Finally, don’t forget the importance of greed. Greed is the human urge to splash out on the latest gadget or fashion. In short, it’s what drives people to buy the latest accessories they don’t really need, only to wish they had the money later on.

If you really want something, save for it in advance or even wait until its reduced. Remember that everything is expensive when it just comes out, and waiting can yield its own rewards.

It’s always going to be a hard choice when choosing from a hard range of high interest savings accounts and comparing from a wide range of investment plans.  However whatever you do, try to avoid falling in the pitfall of the 7 deadly sins if you can!

A passionate finance blogger who just loves sharing her knowledge with you!

A passionate finance blogger who just loves sharing her knowledge with you!